Use Google Fonts in Phaser 3 with Web Font Loader

Use the collection of free fonts from Google and Adobe in your Phaser game!


There are tons of beautiful web fonts we can use for web-based projects–including web-based games–from Google and Adobe.

Phaser is a great framework for making web-based, HTML5 games but it does not handle loading web fonts.

There are a few ways to get web fonts working in your game from hacked together to fully integrated into Phaser as a plugin.

In this article we go just short of making a plugin while still hooking into Phaser's asset management system so that fonts are preloaded before text is created.

We will use the Web Font Loader library along with Phaser's File class.

The code here will be in Modern JavaScript but you should be able to adapt it as necessary.

As a best practice fonts should be loaded in the Scene's preload() method or the text may not render correctly.

We can do that by using this.load.addFile() which takes a Phaser.Loader.File instance. The File class is intended as an abstract base class so we will extend it in our WebFontFile class.

We are importing WebFontLoader on line 3. You will have to have run npm install webfontloader in order for this import to work. Alternatively, you can omit the import and load WebFontLoader from a CDN.

See the instructions on the WebFontLoader Github page.

Phaser.Loader.File has several methods you can override but the most important one is load(). It is where we have WebFontLoader do its magic. Once the fonts are loaded we let Phaser know on line 27.

In this example, we only implemented support for Google Fonts and will throw an error for any other service.

Note: There are shortcomings to this basic example that we will discuss in the Advanced Example section.

Using WebFontFile in a Scene

Now let's give WebFontFile a try by preloading a font and creating some text.

Note: For fonts with spaces in the name we need to include double quotes as you see on line 20.

In preload() we use this.load.addFile and pass in a WebFontFile instance that will load Press Start 2P from Google Fonts. Then we create text that says Hello World! with Press Start 2P as the desired font on line 20 in create().

We are using the phaser3-parcel-template to bootstrap our project with a game window size of 800 x 600 so our Scene looks like this: 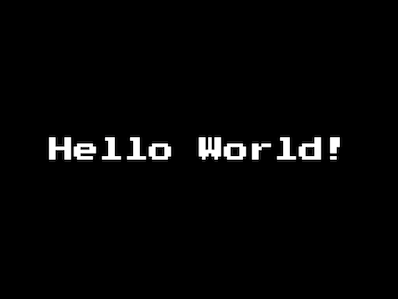 You can also load multiple fonts by using an array like this:

The basic WebFontFile above should work fine in most cases. One thing it does not handle is being used more than once:

Generally, you will want to use an array of names when loading multiple fonts. This allows WebFontLoader to make a batched request and get all the fonts in one network call.

That said, it doesn't hurt to have a more robust version of WebFontFile!

We made changes to use the fontactive callback instead of active to check if the specific fonts given in the constructor have been loaded and only say we are finished when that has happened.

The callback change is on line 28 and the logic to check if the specific fonts are loaded starts on line 68 in checkLoadedFonts(familyName).

We also hook into fontinactive because the Internet does not always work and a font may fail to load. Odds are we should continue even though the font is missing. At least the game won't be frozen. 😅

There are more sophisticated ways to handle this problem like retries or fallback fonts but we'll leave that to you. 😎

Lastly, we implemented support for Adobe Edge Web Fonts on lines 42 and 60 - 66. You can use it like this:

If you want to use TypeKit, Fonts.com, or some other service then you need to implement support for them. Just follow the structure described by WebFontLoader.

You can get a Gist of the advanced WebFontFile example here.

Let us know in the comments below if anything doesn’t work or is unclear. We’ll be happy to fix or clarify!